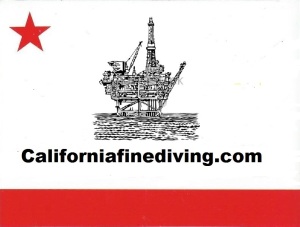 I’ve been writing quite a bit lately here and on other sites about the amazing marine life supported by the rapidly aging and soon-to-be-decommissioned oil rigs operating in the waters  here in the Southern California Bight. The problem facing the continued survival of these micro environments lies in the fact that there are quite a few marine conservation groups, supported by local communities, pushing for complete removal of the structures and the flourishing ecosystems they support. It’s a really odd confrontation between groups that usually find themselves on the same side of marine issues. On one side you have respected local scientists including Chris Lowe of CSULB and Dan Pondella of Occidental College conducting studies showing the productive and valuable nature of these ecosystems and presenting data that supports maintaining the rigs after their service lives have ended. Then on the other side, they are being challenged by prominent conservation groups such as the Ocean Foundation and the Sierra Club, who are  pushing for a complete restoration and removal of the rigs to an original state and holding the oil companies to the agreement they made to remove them entirely. It’s a really unique situation that has supporters of converting the rigs to reefs scrambling.

They have received some recent help. California Sen. Robert Hertzberg, D-Van Nuys, is proposing a bill that would create a process by which decommissioned rigs would be turned over to the State Lands Commission, with financial support, to maintain these rigs safely as reefs in perpetuity.

Take a few minutes to read this piece by Rachel Uranga of the Daily Breeze as she takes a in-depth look at the battle of these unique and flourishing ecosystems just off our shores and in the halls of Sacramento.

Also take a few minutes and watch this video by Emily Callahan and Amber Jackson from Rigs To Reefs and experience what these sides are fighting over.