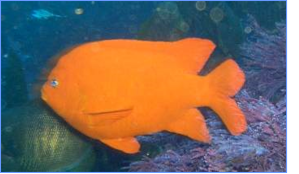 Yes. I said it. For the first time ever, someone has described the Garibaldi as whack. Totally whack in fact. Why you ask? Because I think we’ve taken this fine inhabitant of the kelp forest for granted for far too long. First of all, it is the state marine fish of California, no small feat in state where everyone wants to be a star. Suck it Pile Perch.

Secondly, it has a merit-based hierarchy. Males commonly build nests to impress the lady fish when it comes time to reproduce. The females then take a tour of several different nests and decide which nest she likes best and lays her eggs accordingly. Bachelor fish living in their parents spare nest need not apply.

Finally,  it is fierce. As the largest member of the damselfish family, it will protect its nest against anyone who gets too close. Size doesn’t matter. Like Hulk Hogan, it will fight anyone, anywhere, at any time during nesting season brother! Let’s go the video:

All in all, a pretty impressive resume for a fish that has enjoyed total protection from collection and fishing since 1995. So when you’re out there and see this orange burst of energy swimming by, enjoy and have more than a little mad respect.